by Ozz on 11/04/19
November is not only a month to count blessings. It is also a month of celebration as Call Me Ozz celebrates its 7th year!
Call Me Ozz Birthday Bash 2019!
It's time to celebrate another year of Call Me Ozz! CMO Founder, Ozz, will also be celebrating his birthday this month. Come celebrate both birthdays in the Gold Room at Red Velvet Underground Musical Cafe! There will be karaoke, comedy, burlesque, and did I mention cake?
When: November 15th
Where: Red Velvet Underground Musical Cafe
Time: 5pm - 12am
Price: No Cover, Food or Beverage Purchase Required.
More Events This Month...
3rd Annual Venus Awards Singing Competition
Sidewinders is hosting their 3rd Annual Venus Awards Singing Competition!
All styles are welcomed and encouraged.
First place: $200
Second place: $100
Third place: $50
REGISTER HERE!

Free Admission To Explora For Veterans

For one day, Veterans can partake in Explora’s hands on science exhibits for free!

Discover all there is to know about ocean life with an overnight experience at the Albuquerque BioPark featuring  Penguins and Jellyfish!

Renee D. Burreson's "Breakthrough" released this fall. To celebrate, she will be hosting her first book signing at the Red Velvet Underground at the Call Me Ozz Birthday Bash!
When: November 15th
Where: Red Velvet Underground at 9635 Menaul Blvd NE,, Albuquerque, New Mexico 87112
Time: 5pm
Price: A limited number of books will be available for free. Otherwise you can purchase them locally from Title Wave Books Revised. Or Online via Soma Publishing and Amazon.
Lung Force Walk

Raise awareness and funds in the fight against Lung Cancer. For a team or register as an individual and work towards a cure one step at a time.

« Gadspooks, It's... | Main | There's No Time Like... »
HAVE YOU SEEN THE KJ SHOWCASE?
See where your favorite KJ is tonight!
PROFILES OF ALL THE KNOWN KJ'S
LET US KNOW WHAT YOU THINK!
"Call Me Ozz is the best place in town for customer service. We were very happy with the results."
News and Reviews for Call Me Ozz-You're trusted name for your addiction!
Karaoke Albuquerque 2-1-14
NEW MEMBERS:
Be sure and drop by the Members Corners and say hi to our newest members:  Maco0107 and the Karaoke Boss! Welcome Aboard!
MY "FAVOR-EIGHT"
I get asked all the time, "where is your favorite place to go". I can't pick just one. I like them all.....well almost. Some places I like because of the KJ, or the Sound, or the Stage.....so here are my favorite eight places right now:
Effingbar
Barley Room
Blackbird
Sneakerz
Graham Central Station
Louie's
Cowgirl
Speakeasy
Once a month Howling Coyote pulls out all the stops and brings the 40 foot stage and concert auditorium to life in San Felipe. Next show, Friday, January 31st from 8pm-midnight...Click on the header for more information!
HOLLYWOOD CASINO

EVEN OLD NEWS IS NEWS...
What do we with the stories of the past? Why we send them over to the Past News Stories page. 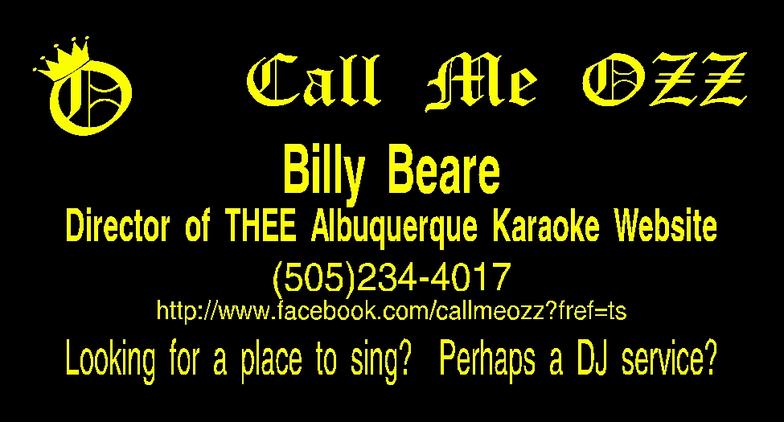 NEW VIDEOS UPLOADED
We have a new video this week from Ozz and KJ Pyles host for Gators in Dallas singing No More Tears and Dreamer as a duet.... 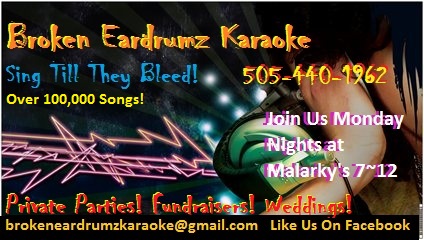 SINGERS FORUMS:
NO GRAVITY NIGHT CLUB
So unfortunately the Gravity Night Club didn't work. There were some issues concerning the liquor license and a just wasn't up to snuff. We don't know if it will ever happen, but if it does, we will let you know!
LIVE MIC MAKING MAJOR CHANGES!
Teles Edwell has been a KJ in Albuquerque as long as I can remember. I first met him at Sneakerz, he KJ'd for Boop for many many years between Sneakerz and Spectators. After a falling out with Boop he began his own business with a partner. First at Spectators, then Geckos, then Post 99 and 49 and his latest, Ned's. His crew included Felicia aka Live Mic 2 and Zero who was at Geckos and is no longer. His scheduled has changed a bit so here it is: Teles: Spectators on Friday's. Post 99 every other Wednesday. Ned's every Wednesday. He is need of another KJ for every other Wednesday, if you are interested contact him through Call Me Ozz.   Felicia, aka LIVE MIC 2 can be found at Post 49 on Wednesdays, Geckos on Tuesday's and Spectators on Saturday's.
Ed's is no more!
​We have always known Ed's to be at Leisure Bowl. Well no more. Leisure Bowl was purchased by Holiday Bowl last year and they have been making a lot of changes over there. They have already installed new score machines, now they are working on the bar. It is now called Mr Z's @ Skidz Entertainment Center. They have upgraded their song selection and their sound system. You can find karaoke there 7 nights a week and comedy every other Sunday.
ED SOL HEADS TO ISLETA!!!!
If you don't know who Ed Sol is, you should really find out! Ed was the WORLD KARAOKE CHAMPION in 2010 and holds more local wins than any other singer I know. Not to mention the lead singer of BLUE SOL. He is also the KJ at Silva Lanes on some week nights. On Thursday, February 6th he will be launching solo at Isleta Casino. Say hello to him from 7:30-11:30pm.

ANOTHER NEW ONE AT SILVA LANES
OK Silva Lanes, you're driving us all nuts! So I went into Silva Lanes last Friday night, expecting to see the new girl Stephanie, but she is gone and now it's Corey, aka DJ Sexykinda. He is there on Friday and Saturday's. Silva Lanes has karaoke every night of the week. 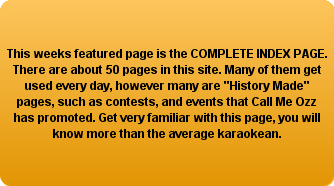 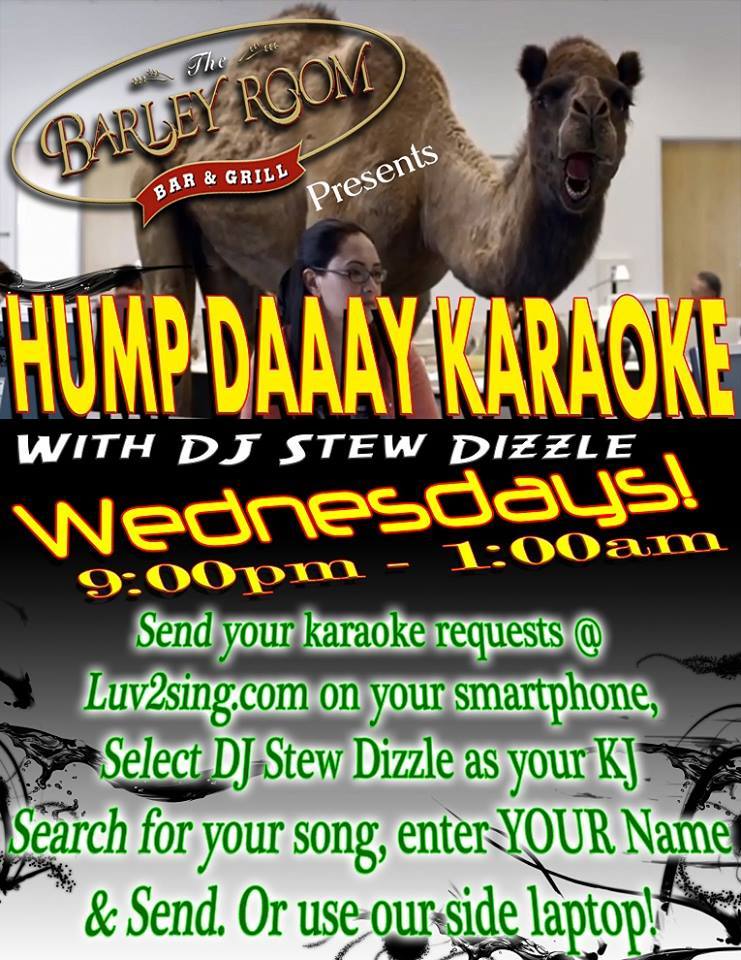 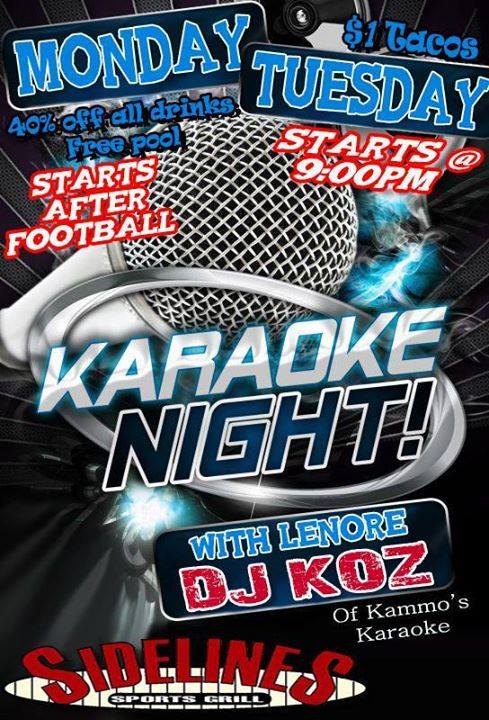 AND
Bring you the best karaoke on the westside every Thursday and Saturday night from 9pm-1am
5300 Sequoia Road N.W./Albuquerque 87120
4 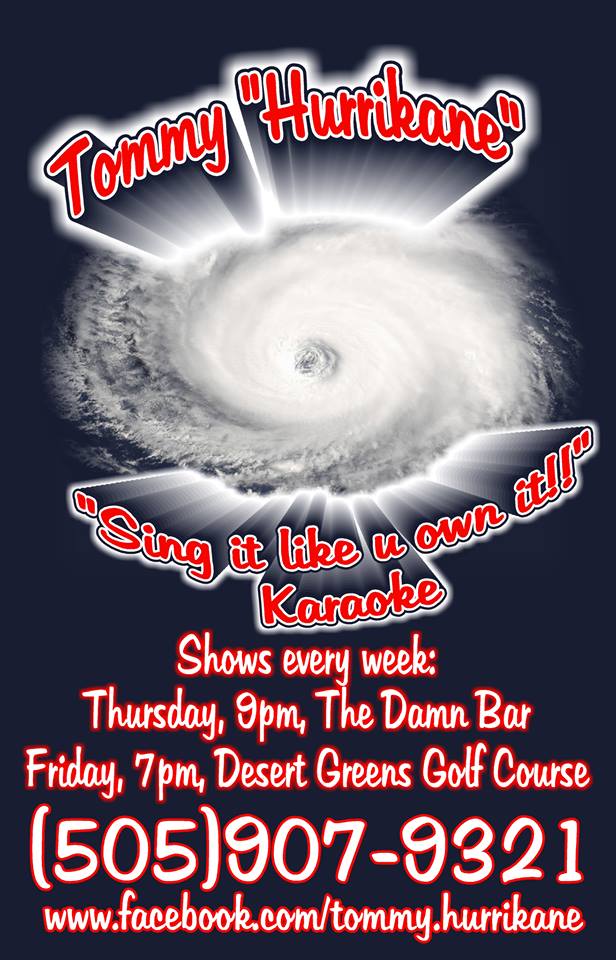 *******CANCELLED*********
The Hollywood Casino shows have been cancelled at this time. Check back often to find out when they resume.
3 CLUBS IN-3 NIGHTS OF KARAOKE
​Leo's NIghtclub in the North Valley, on the corner of Candelaria and 12th Street has 3 clubs in and has karaoke in each club a different night of the week. You can find Allan Estrada (used to be at Lucky Lanes) in Leo's on Monday's, in the Speakeasy Lounge on Thursday's and in the $2 Bar n Friday's.

​Graham Central Station is now 18-21 on Thursday nights. There is a $6 cover for them and the Country Bar and the Karaoke Bar are open. This is an idea I had thought of some time ago. Glad to see Graham is doing this.

DJ GLO TO DEBUT AT POST 69 ON FRIDAY
DJ Glo is to debut her night at the Post 69 on 4th on Friday from 7-11pm. DJ Glo is better known in the karaoke world as Gloria Chavez. She gets out to sing on a pretty regular basis. She has hosted gigs in Santa Fe, this will be her DJ Glo is to deb in Albuquerque.

LIVE MIC OPENS UP THE MAIN EVENT
Goodbye Knuckleheads, hello Main Event. The old Knuckleheads on Coors is re-opening as The Main Event and Live Mic will be hosting karaoke there on Wednesday nights. Stop by and tell Teles hello.